When I first reviewed the Perentie Badger many issues ago, I made a comment about a double barrel Badger. I must admit, I didn’t actually order one two years ago, it was just an idle thought. Just after the Australian Masters I was talking to Bruce Roberts about all things paintball, when the idea of making a double came to mind again. We talked idly about how it would look and discussed some of the problems associated with operating two sets of sears.

Two weeks later and Bruce had a drawing of a sear arrangement to show me. It was about then, looking at that drawing, that we decided to go ahead with the whole project. Why? who knows. It wouldn’t be eligible for most tournaments held in Australia and it looked like it was going to be a hefty piece of equipment. I guess we did it just to show that it was possible.

Many doubles have been made in the U.S. in the past, usually by bolting two guns such as PMI3s or Tippmann 68 Specials together. Some have been one off specials, such as the AutoMag double from Airgun Designs. Others such as the Deuce, a really nice compact pump or the doubles from Glen Palmer were widely sold to the paintball playing public. In fact, double barrel guns are still available on special order from Glen Palmer today.

The double barrel Perentie uses the same blow forward action as a standard Badger, so functioning in this area was not going to be a problem. Where difficulties could arise, would be with the sear arrangement. We had several choices here and they primarily depended on barrel placement. If we placed both barrels close together, we would get a taller than normal gun, because of the extra linkages required to join both sears to the one trigger. It isn’t practical to just join the two sears together, because the trigger pull would be twice as heavy. You really need to increase the trigger pull to overcome this problem.

The second option was to turn the two actions in on each other and use a trigger mounted cam to fire off the marker. The problem with this method, was that the barrels would be some distance apart. But since the two hoppers would determine the overall width of the marker, it wasn’t really an issue. Besides, what appealed to us about this arrangement, was the simplicity of the sear mechanism, so this is the method that we chose.
As you can see from the diagram, the sears are fitted with delrin rollers. A pyramid shaped cam on the top of the trigger is designed to push these apart to disengage the sears and fire the marker. A return spring was later fitted to the trigger to assist it back from its rearward position after firing. The timing of the actions was critical and was perfected with a lot of trial and error. As it stands, one barrel fires before the other and it is possible to fire just one shot. 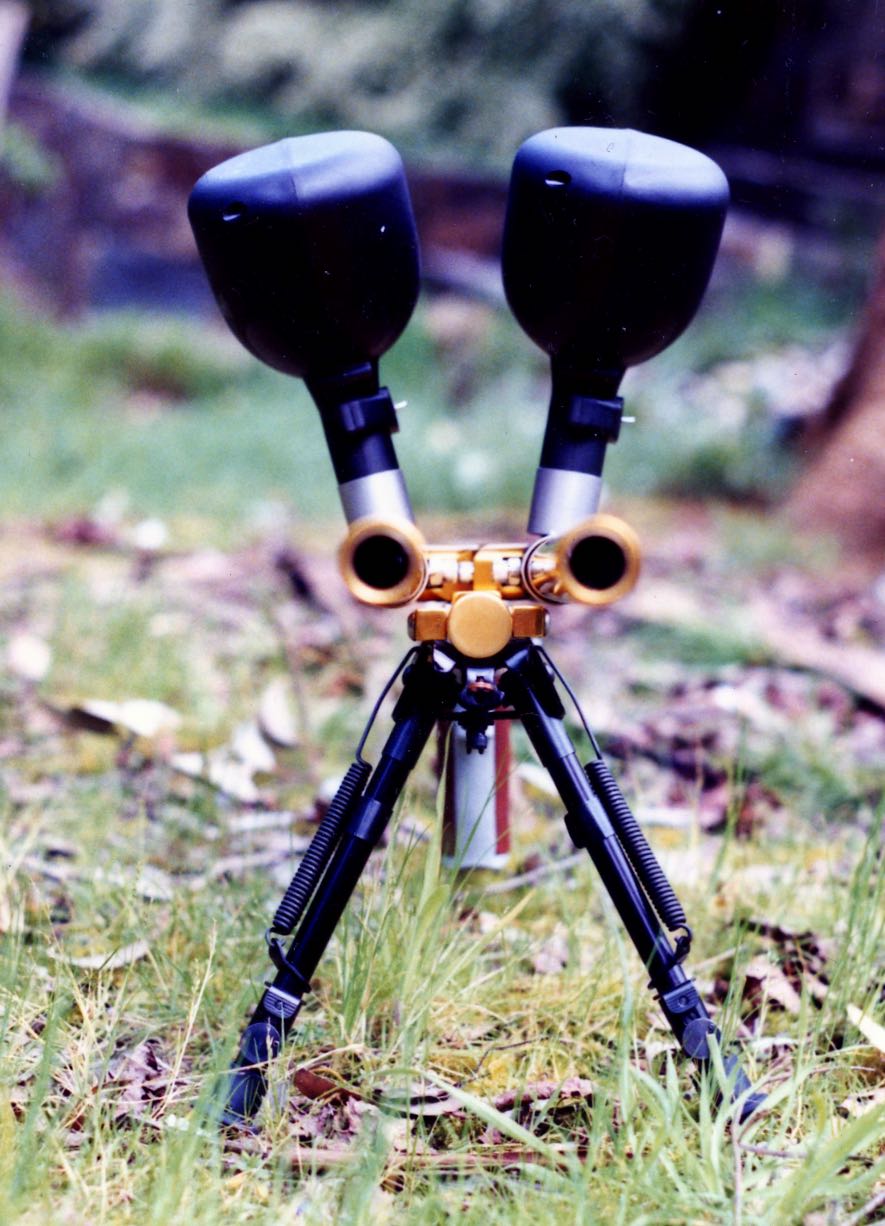 With the action perfected, the rest was basically cosmetics. Surprisingly, this took over two weeks to get right. With the two actions sitting so far apart, it was difficult to balance the front of the gun with the stock. Several of the designs we came up with just looked awful. I had wanted a stock reminiscent of the Soviet Dragunov Sniper Rifle and a hint of this remains in the final stock design. To balance the wide placement of the actions, we decided to run two alloy rails, one down each side of the marker. These gave us somewhere to mount the bipod and give a good line, similar to a wire stock, which follows through to the butt plate. The Butt plate is roughly triangular in shape and fits between the two upper rails and a lower strap. The strap being connected to the milled off Badger handle.

Handmade mahogany grips were then cut and fitted to each side of the handle. The rest of the handle was then bead blasted to match the stainless steel receivers. This was followed up with a pair of 16″ barrels to meet Victorian firearms regulations. Finally, all that remained was the polishing and gold anodising of the alloy parts. To top it off, a pair of VL2000’s were fitted. VL3000’s would have been nice, but sanity and a peek at my bank balance brought me back to earth. Anyway, the thought of carrying as much paint on the gun as I do in my harness seemed a little ridiculous.

Finally, it was time to take it out for its first outing. This marker is set up for a remote system and is designed primarily for use with air. With its huge appetite for gas, a CO2 system would be spending much of its time frozen, as I found out on the day after some rapid firing. The gun functions very well and sounds quite distinctive with its staggered firing order. The two barrels shoot quite close together, but they may need a bit of a tweak, only time and more testing will determine this. Overall, I’m very happy with the final result, so expect to see it around at the occasional scenario or big game in the future.

This isn’t the only one off special that Bruce has made, he has made many custom variations of the Badger for tournament use. He has even made a few weird specials like the Borg outfit or the double gun fitted to a bike helmet. Like these, the double barrel Perentie Viper is a one off special and Bruce has little intention of making them on a commercial basis. It’s just too time consuming to make one off’s and I think I drove him a little bit crazy with some my requests. H’mm that reminds me, now Bruce, about that 2″ sabot cannon on a gun carriage, by Christmas???