It was a cool overcast morning and for the first time in months, I was feeling enthusiastic about our local paintball scene. As I gathered my cameras and gear together I gave a quick thought to how Paintball had suffered and was now hopefully on the long slow road to recovery in Victoria (southern state of Australia).

In Victoria, paintball guns have always been treated as firearms and a shooters licence is required to own one. Because of this, commercial Paintball Fields required a special exemption from the government to rent paintball guns to unlicensed players. Unfortunately, because of a personal dislike of the sport by the Police Minister & the Chief Commissioner of Police, these permits were not renewed when they came due. After much political lobbying and just when the situation was looking promising, the Port Arthur shootings occurred. So, as it stands, commercial paintball hangs by a thread. The only reason some of the fields are still in operation is because of a loophole in the law that allows paintball fields to offer instruction in the handling of guns – yep, playing paintball.

As you can imagine, this played havoc with our fledgling tournament scene which was just gathering momentum in 1996. It barely survived this near death blow and is only now showing slow signs of recovery. So you can imagine my joy at the chance to breath in the atmosphere of a local tournament again.

The Victorian 5 Man Masters was held at the Paintball Action Games paintball field located near Ballan, about an hour and a half’s drive from Melbourne. This is a beautiful part of Victoria, being heavily wooded. The field has perhaps the best facilities of any field in Victoria, boasting a great amenities block including a meeting room. Unfortunately it was still unfinished because of the ongoing legal problems. 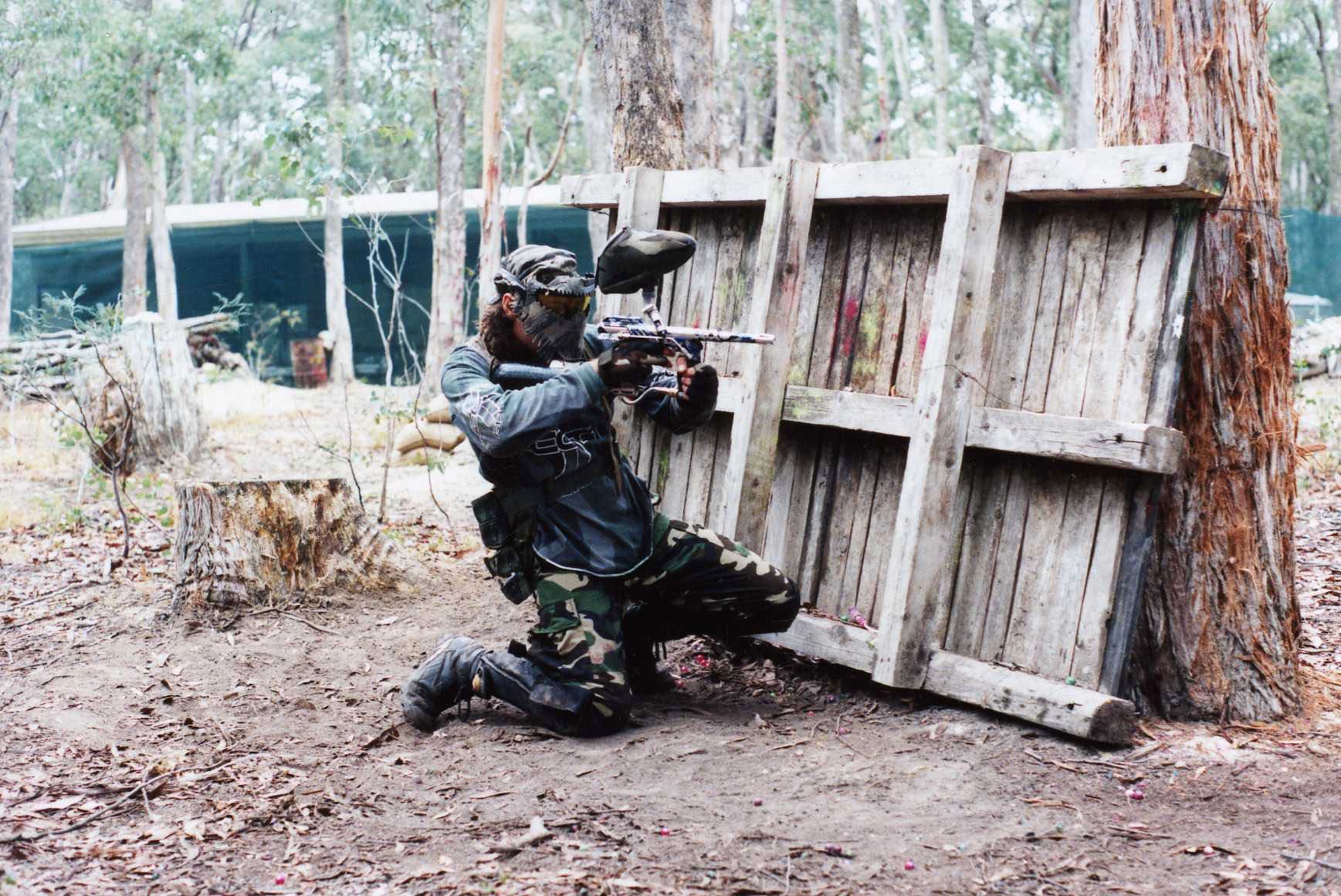 Three fields had been laid out, a Speedball field with shade cloth spectator areas, a village field and a bush field. Traditional 2 flag, APPL rules (similar to NPPL) games were set to start at the usual early time. Having played these fields in 1996 in the Victorian 3 Man series, I knew we were going to see some hard and fast play. I was glad to see that work had been done to even out the ends on the Speedball field.

Twelve teams had gathered here including three from New South Wales and two from South Australia. A great sign of solidarity and commitment to tournament paintball in Australia. The teams were broken into two divisions, Pro & Amateur. However, because of the small team numbers, every team had a chance to mix it with both Pro and Amateur. All the division did, was give the amateur teams a chance to take home a trophy.

The core of the referees were made up of Apparition, Paintball Action Games’ home team. Winners of the 3 man series in 1996 and made up of members of the old Blackwood Hunters, some of these guys have over 10 years experience in paintball. Still, there were some minor problems with calls made on the field. However, until we can hold regular tournaments so that the newer referees can gain experience, this is inevitable. Overall, there was sense of satisfaction amongst the teams on the day with the referees.

During the preliminaries, each team had a chance to play three Pro & three Amateur teams. To help even out the skill levels, teams were seeded so that they played others of a similar skill level where possible. This ensured that no team got a free ride to the finals. The early games soon showed that all that training had paid off for local team Rat Pack Red, as they maxed their way through their opponents in the Pro division. Magnum were plugging away solidly, whilst The Firm and the Top Hat Jokers were looking shaky. On the Amateur front, KMA, another local team performed strongly and were looking good for a trophy. Lunch came and went, the sky started to clear and the sun finally started to peak through the clouds. In the Pits, panic and disorder prevailed. Questions rang out, “When are we up?”, “Who’s got a spare……?”, at least we were spared the mud that usually greets one out this way! Automags and Autocockers proved to be the most popular guns, with a sprinkling of other brands including a few Spyders. A couple of Angels could be seen, but with their $2000 Australian price tag, they were only in small numbers. I was impressed by their clean lines, simple method of operation and easy to clean breach.

Four teams from each division now prepared for the finals. It’s hard to cover paintball tournaments, you feel that you have to be everywhere at the same time. In the Amateur Division, the Creed and X Rated Green squared off on the village field. A strong breakout by both sides lead to a stand off and neither team seemed willing to make a move as time ticked away. X Rated finally started a push, but it was too late and the whistle blew signalling the end of the game.

In the Pro Division, Rat Pack Red were still on a roll and came out strongly against The Firm. They pushed out far on their right on the Village field and were soon a man down. However, quick thinking and a fast run, soon had the flank secured. The Rats then slowly but surely moved up the field picking off unlucky Firm players until they had the field to themselves and hung the Firm’s flag.

Meanwhile X Rated Blue & Green prepared for battle in the Amateur Division. Both teams came out fast but they were soon dug in for some serious paint throwing. Neither team seemed willing to risk a push and a stalemate seemed inevitable. Then, on the opposite side of the field, a Green player made a quick run from his barricade to a hut slightly further up the field. He had done this manoeuvre so quickly, his opponent who had been preparing for a push of his own, missed it entirely. A comical situation resulted as the Blue player sprinted down the field and around the barricade to be confronted by an empty space. His surprise and hesitation at finding nothing there soon caused his downfall as the Green team suddenly became aware of him. Time ran out shortly after this and another game ended in a stalemate.

Magnum got off to a good start in their match against the Top Hat Jokers and soon had the Jokers down two players on the right flank. The Jokers fought back hard and soon two Magnum players were walking. But it was too late, Magnum had the resolve and rolled over the Jokers and got the hang.

KMA seemed unstoppable and quickly got the jump on X Rated Green. A KMA player pinned down and quickly eliminated the X Rated player on the right flank, moved up, eliminated another and soon had the top corner to himself. Unfortunately, he was soon eliminated by fire from X Rated’s flag station. But not before the rest of KMA had established some good positions in the centre of the field. Confined to the area around their flag station, the remaining X Rated players didn’t have long to wait. A strong push by the remaining KMA players soon had players from both sides walking. This game was not destined to end in a stalemate. The tide seemed to be turning against KMA as a wall of paint was exchanged at close quarters between the remaining players. Finally, there was only one player left and he ran the flag back for KMA to give them the number one spot in the Amateur division.

Meanwhile, the final Pro match was about to get underway. Magnum appeared a certainty to win the Pro Division and only needed one elimination from Rat Pack Red to cement their claim. Rat Pack Red, who had seemed unstoppable in the preliminaries, had won their first game against The Firm, but had stumbled and been maxed by the Jokers. To win the Tournament, they needed a max and they had to do it without losing a single player. Both sides came out fighting and quickly took up positions on the Village field. Magnum seemed content to let the Rats come to them. However, the Rats weren’t about to sit back and worry about an elimination. They knew that they had a tough game in front of them and pushed hard but with care up the left side of the field. In the centre, a Rat Pack player spotted an opportunity to move up unseen by Magnum and soon had a position right alongside Magnum’s Right Flank player. Unfortunately, he was unaware of this at the time. This resulted in yet another memorable moment when the Magnum player on the flank sprinted to the same hut and slammed into the outside wall with a bang. The player inside looked up startled and started to poke his gun through a slot in the wall. Unfortunately, the Magnum player had become aware of him and stuck his gun through at the same time for a mutual. First Place was now firmly in Magnum’s grip and all Rat Pack Red could hope for was second place. But they still needed a hang to achieve this. Time was against them as they pushed hard against Magnum and eliminated two more players. But it was not to be and the game ended in a stalemate. Red Pack Red had to be content with third place.

The day ended with the presentation and trophies were handed out and sponsors thanked. Overall, everybody seemed satisfied with the day’s activities and pronounced the tournament a great success. I can only hope that we will see another tournament in Victoria soon and that the dark clouds of political persecution don’t kill off the enthusiasm I saw that day.